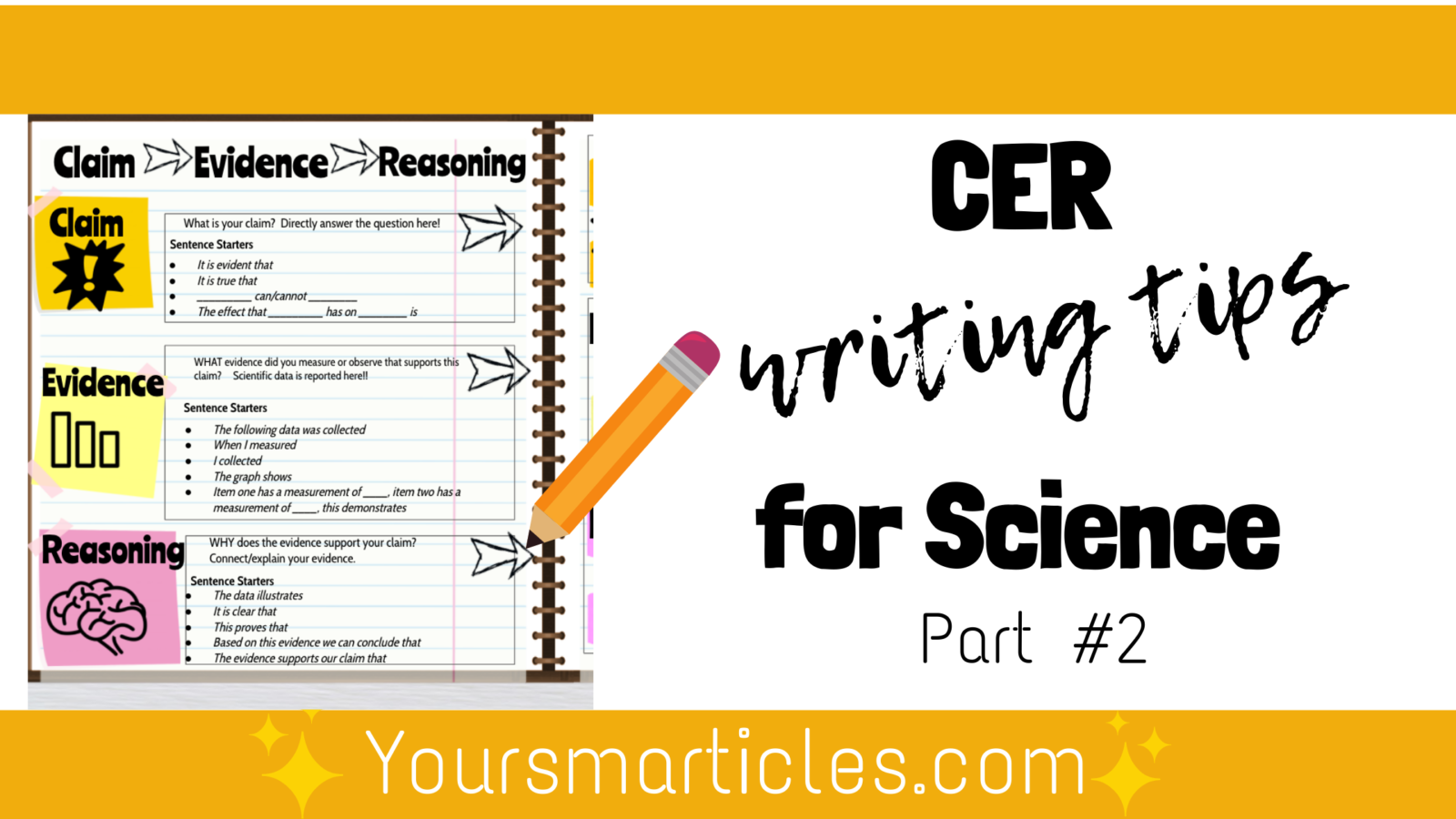 In Part #1 of this CER Series, we took a look at ways to help your students recognize the components of a CER by sorting a series of claim, evidence and reasoning cards. In Part #2, we’ll take a look at how we can support students in the process of writing their own CER Report by providing them with an easy investigation AND sentence starters to support their writing.

To write a CER, students need to have evidence or data that they look at to make a determination. When I teach the CER writing process at the beginning of the year, I isolate ALL of the Science and Engineering Practices so that students are learning the practices out of context first and then later when we begin our studies, they can apply the practices to actual content. For the CER, we conduct an investigation on the absorbency of paper towels and collect data. This investigation provides them with a table of data that they can reference in their CER in the evidence section.

Once they have data, it becomes very obvious to students which paper towel is the most (or least) absorbent, so they are able to establish a claim. A claim is their assertion. It’s what they know or what they discovered. It should be the answer to their investigative question. To get students writing their claim statements scientifically, I use a series of sentences stems or sentence starters as shown below.

By using sentence starters, you can help students avoid writing in first person and aid them in creating a more sophisticated sounding CER Report. These starters also serve as a prompt for the content that needs to be included in each section of the report. With a sentence starter, their claim for the paper towel investigation sounds like this:

IT IS EVIDENT THAT THE NAME BRAND PAPER TOWEL IS THE MOST ABSORBENT PAPER TOWEL.

Next, students move on to the evidence portion of their writing. Again, students are provided with sentence starters and are encouraged to list ALL of the relevant evidence that they collected that supports their claim. I encourage my students to write their evidence in a paragraph including the labels (ml, g, mm, etc.) This section should only be a report of the data. It should not explain the results or make the connection back to the claim…that’s the job of the reasoning section. In the case of this paper towel investigation, their evidence section would sound something like this:

The final section of a CER is the reasoning. In general this is a very difficult section of students to write and I find that their ability to write reasoning improves as the depth of the investigation and their scientific knowledge expands. In the case of this paper towel investigation, we aren’t exploring the science behind absorption, but rather reporting what we see, so the reasoning portion is a little shallow. This is OK. This CER is our starting point and it is their first time. The initial goal of this CER Report is to have students make the connection from the data to the claim explaining WHY the data supports the claim. For the paper towel investigation, their reasoning would sound something like this:

IT IS CLEAR THAT THE STORE BRAND PAPER TOWEL IS THE MOST ABSORBENT PAPER TOWEL WHEN COMPARED TO THE DOLLAR STORE BRAND AND THE SCHOOL PAPER TOWELS BECAUSE IT LEFT BEHIND THE SMALLEST AMOUNT OF WATER.

If you’re looking for a CER template, here’s what I use. It’s a digital interactive notebook page that I use for ALL of their CER reports throughout the year.